It’s been almost two months since we brew our “base” Witbier and about a month and half since we bottle it, already turned into three different beers (you can see all the process explained here). After all this time, it’s time to talk about how these three beers turned out. 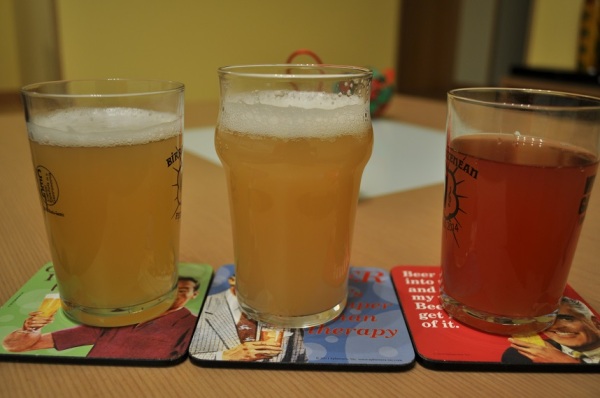 We are going to focus on the general appearance of the three beers and then we will detail flavor and aroma for each one of them, separately. Evidently, the Wibiter with blackberries is the one which stands out from the three beers, due to the redish-orange color it posseses. It has also another peculiar characteristic, it has very little foam compared with the other two beers, and this foam disappears rapidly (it is almost gone in the pictures due to the fact that it took me some time to get a good shot). I guess this could be due to some type of interaction of some compound from the fruit, but it is just that, a guessing.

The other two beers look quite similar, with almost the same color and good foam generation. I would like to think this generous foam is due to the first step of the mash at 50ºC (122ºF), but it could also be due to the presence of a great amount of wheat flakes in the recipe. The retention of this foam is something we must improve, because although not immediately, the foam tends to dissipate after not much time. Regarding color and turbidity, we are quite happy with the results, being both in accordance with the style guidelines.

Now it is time for flavor and aroma. Before we get down to it, a little observation: for the three beers, flavor and aroma are more complex (and better in our opinion) when the temperature of the beers is around 10ºC (50ºF). The aroma in the Witibier with blackberries is clearly dominated by the fruit. Even more, it is difficult to appreciate other aromas apart from that of the blackberries, even though is not very intense. For flavor, more of the same, but the blackberry flavor is quiet strong. It really tastes like blackberries and it is difficult, even knowing the rest of the ingredients, to find other nuances of flavor. We were used to use blackberries with darker styles of beer (Porter or Brown Ale), and in those type of beers, this fruit only gave a little touch that made them special. Witbier seems to be a good style for fruits… if you want them to shine. This a complete different beer from the standard Witbier, and we have the feeling it is a beer that either you love it or you hate it. If you like blackberries, you will definitely like it. 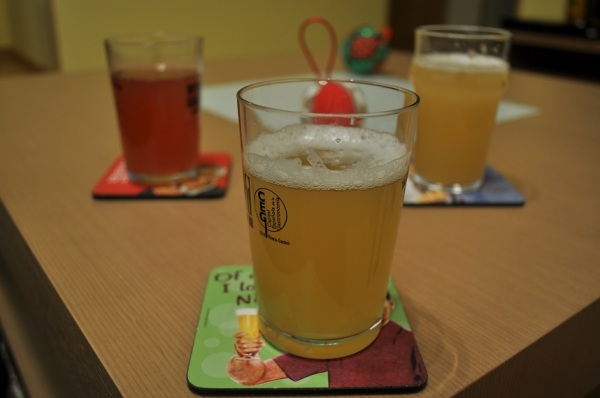 The second beer derived from the original Witbier base recipe was the one with Cascade dry hopping (25 g/0.88 oz for about of 6 liters/1.6 gallons). Possibly because of this limited amount of hops or because this hop cones had some time, hop aroma is not easy to detect. If we did not know it had been dry hopped, probably I would not tell based on the aroma alone (although it could also be a lack of ability to detect that aroma among the other aromas present, you never know). Here we could at last smell some typical Witbier aromas, although it seems as if hops would interfere in some way, since it is relatively easy to distinguish this beer from the standard Witbier only by smelling them. On the other hand, regarding flavor, a very pleasant note of hops is present. The beer is slightly sweet and spicy, with low bitterness… and perhaps a little bit short on citric notes, the ones that the orange peel should have contributed.

We left the standard Witbier for the last tasting. For the aroma, the spicy notes from the yeast are present, as well as some coriander. But, as it happened with the dry hopped beer, the citric aromas from the orange peel are missing. Chamomile aroma, on the other hand, is maybe a little bit in excess. This did not worry us, because this aroma usually fades with time (the first bottles we opened had even more chamomile aroma). As for flavor, same thing, at first chamomile flavor was too stong and it masked the rest of flavors. Fortunately, this flavor had also mellowed, and right now, the chamomile flavor is more subtle, very pleasant, and others flavors are more noticeable. It still lacks some citric touch from the orange peel, we will have to improve this in the future.

To end the tasting, some characteristics that the three beers share and, in our opinion, are common for this style. A high carbonation, a low level of alcohol (around 3.5% by volume) and a quite creamy mouthfeel (maybe a little less creamy in the one with blackberries). All of this, and the fact that the beers are moderately dry, make them very refreshing and easy drinkable beers. People who tasted them approved them (although it is difficult to find critics when you offer free beer). We will continue collecting new opinions with friends and relatives to find something we may overlooked.

On a final note, we must say we are quite content with the obtained result of this triple threat Witbier experiment, despite some aspects to be improved in the future. Besides all, the flavor and aroma from the orange peel, we would have liked it to be more prominent. We don’t known if it was something wrong with the type of oranges, the amount of orange peel,… We will have to try some alternatives. Additionally, now perhaps we would make some small changes with the amounts of coriander (a bit more) and chamomile (a bit less) to round the recipe.

*This post was first published in Spanish on 30 December, 2016

This site uses Akismet to reduce spam. Learn how your comment data is processed.

Ales of the Riverwards

Sour beer and brewing education for both home and craft brewers.

'Zee-tho-fyle', by Martyn Cornell, an award-winning blog about beer now and then, founded in 2007

Shut up about Barclay Perkins

They Who Drink Beer Will Think Beer